Are you a Student or Teacher? 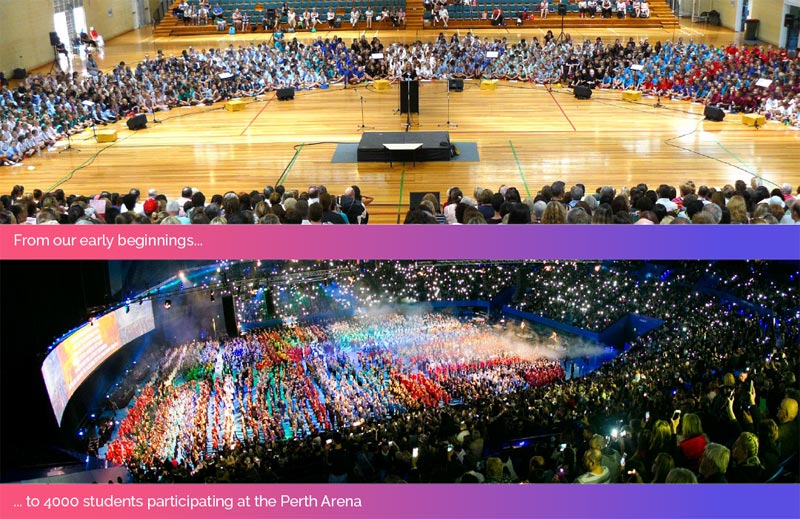 In 2001 the first committee was formed with Judy Vorster, Donna Marwick O’Brien, Helen Fabri, Paul Storey and Berne Rogers. This committee continued to work together until 2006 when Judy relocated to Queensland, leaving the festival (now known as Westcoast Songfest) in the capable hands of Donna Marwick-O’Brien, Helen Fabri and Paul Storey who continued to develop it.

Sadly, Paul Storey resigned due to ill health and in 2015, passed away. His contribution to music, children and the festival is greatly missed.

By 2015 three festivals at Joondalup Arena and one south of the river at the Rockingham Mike Barnett, Sports Complex were held with approximately 4600 students participating in total.

New and wonderful committee members joined Donna Marwick-O’Brien and Helen Fabri, and 2016 marked our 17th anniversary with 4000 students from 74 schools performing at Perth Arena, and the realisation of our dream of performing as One Big Voice. Helen Fabri resigned at the end of 2016, after sixteen years with the festival. Her role in the development of this festival has made a significant contribution to music education in Western Australia and the wider community.

Again in 2017 schools came together at the world-class venue, Perth Arena, to perform for one evening performance as One Big Voice. Lux Events worked alongside us, providing an amazing 40 metre curved screen (the only one in Australia), and effect lighting added some extra magic to the performance. Our popular Young Talent section was introduced in 2013 and provides an opportunity to showcase the talents of our older students who are no longer in primary school. Outstanding young performers are invited to entertain the audience for 30 minutes before the concert begins.

One Big Voice has become an important part of the school year and is a highlight for students and teachers. Donna Marwick-O’Brien continues to write, arrange and develop the musical programme and provide opportunities for as many students as possible in the roles of soloists, vocal groups, comperes, dancers and in 2018 and 2019 instrumentalists were also highlighted. In 2019, more than 130 students participated in these roles. The repertoire and professional development provided annually assists music and classroom teachers in their school environment.

The teachers involved in One Big Voice work as a team. They are talented, hardworking and enthusiastic, preparing their students for this special experience.

As Plato said, “Music gives a soul to the universe, wings to the mind, flight to the imagination and life to everything.”

As Plato said, “Music gives a soul to the universe, wings to the mind, flight to the imagination and life to everything”.